At Danville schools, a robot’s touch opens doors of communication 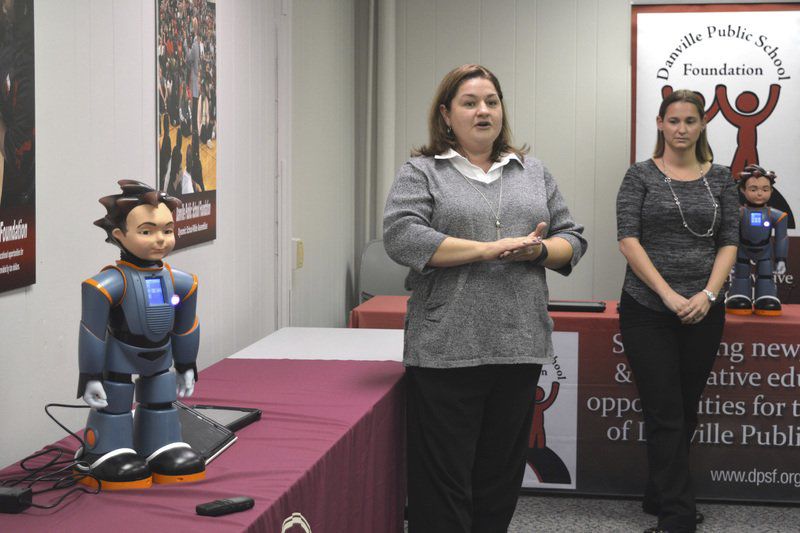 DANVILLE — This year, Michelle Craig has a student with autism who never makes eye contact with her or other
adults.

“When you talk to her, she always looks down at the ground,” said Craig, a special-education teacher at Mark Denman
Elementary and a life skills teacher for 3-5 students.

That changed last week when the little girl met Milo.

“The second Milo said ‘Hello,’ she looked right up at him and said ‘Hello.’ I’ve never seen that,” Craig said. “We’re really
excited to get that kind of learning done, so she can go to an adult and say ‘hello’ and look them in the eye and smile.”
Milo is a revolutionary robot developed by Dallas-based RoboKind to teach social and emotional skills to students with
autism.

The Danville school district was able to purchase three robots, teacher and student tablets for each, and the
accompanying Robots4Autism curriculum through a partnership with the Danville Public School Foundation. (The
foundation bought the technology through grants from the Iroquois Federal and Wheeler foundations and a donation
from the Danville Chapter of AMBUCS. The school district covered the cost of the curriculum for the next three years.)
The high-tech tools were made available in 2013 and are now being used in 34 states, said Bob Richard, the
foundation’s executive director. He said Danville is the fifth school district in Illinois to get them.

Autism spectrum disorder is a developmental disability that can cause significant social, communication and
behavioral challenges. The Centers for Disease Control and Prevention estimates that one in 68 children has been
diagnosed with ASD.

Special Education Director Molly Stanis said people with autism may have difficulty developing language skills and
understanding nonverbal communication such as facial expressions and hand gestures, and that can affect their ability
to interact with others, especially people their own age.

Milo, who stands about two feet tall and looks like a young boy wearing a gray space suit, was designed to be interesting
and approachable for children with autism.

On Wednesday, Craig and Rachel Webber, a Meade Park Elementary special education teacher, demonstrated how
Milo can walk, talk, dance and make facial expressions, exhibiting 11 different emotions such as excitement, surprise,
worry and denial. When he’s happy, his mouth moves into a smile and his nose scrunches up. When he’s scared, his
eyebrows raise and his jaw drops.

“As odd as it seems teaching kids with autism through a robot how to interact with humans, it works,” said Webber,
who — along with Craig, another special education teacher and two speech pathologists — trained on the robots last
week and have been using them with 30 to 40 students since then.

“I’ve only had it five days, and we have kids that are becoming more verbal already. They’re talking to the robot. They’re
talking to us about the robot. It’s giving them that chance to communicate that they haven’t done before.”

Stanis said the scientific-based Robots4Autism curriculum teaches students to understand the meaning of emotions
and expressions and demonstrates appropriate social behavior through numerous lessons and activities.

As he speaks, symbols are displayed on a screen on his chest, aimed at helping students better understand what he is
saying.

In each lesson, Milo asks students to watch a video clip on their tablet of children displaying a skill or behavior that he’s
teaching. Then he asks them yes or no questions to determine if the children in the video are doing the behaviors
correctly or incorrectly.

“The idea is if we start working on these skills with the robots, we can get them to work on them with small groups of
their peers and possibly adults,” Stanis said.

Stanis said social skills often need to be practiced repeatedly. She pointed out the robots will consistently deliver
lessons in a way they respond to without ever getting tired or showing signs of frustration.

In addition to delivering information, they also collect data to “let us know how the student is interacting,” Craig said.

Stanis said the robots aren’t meant to take the place of a teacher. She also cautioned they won’t help every student with
autism. Right now, staff are working with children to see who might benefit.

“They’re just one more educational tool we can use to try to help our students be successful,” she said.

Other articles from Danville: